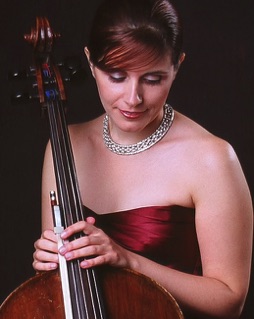 "Kovic's music makes for a story that is as interesting and fleshed-out as any novel or movie... Her ability as a cellist and as a composer unites disparate elements into something beautiful. "

Biana has composed music for films, singles, albums, and documentaries.

A classically trained cellist and a winner of many awards, Biana has performed solo, chamber, and orchestra concerts throughout the US. Her performances in New York City include Carnegie Hall, Weill Recital Hall, Steinway Hall, Cami Hall, Zankel Hall, The Open Center, The Tibetan House, and Avery Fisher Hall.

Biana's work with cello students of various abilities and performance-related injuries has inspired her to develop the Energy Efficient Cello Technique that helped many students play the cello with ease and pain-free. Biana's students have gone on to careers as soloists, chamber & orchestral musicians and session players.

Biana is a big fan of baseball, and in 2006 she was invited to do solo cello performance of The National Anthem at the Shea Stadium & CITI Field and has performed consecutively until 2010.

In 2010, as part of her graduate degree program, Biana had conducted research on identifying musical talent in students, published under the same name. The research paper is available on LinkedIn and cited in many publication.

In 2014, Biana had co-produced with Jim DeVivo and Joaquin Lievano, two singles, One Perfect Moment and Freed.

In 2018, Biana had co-produced with Jim DeVivo and wrote the music for the Nurturing Babies Lullabies Series available on YouTube.