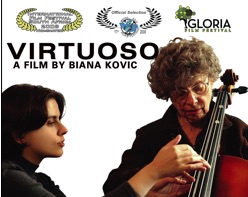 "I love this film! This inspirational documentary challenges viewers to rethink ideas about age, learning, and discovering passion throughout life.... Ms. Kovic skillfully bring to light the importance of the following concepts that are so true for both,

This 2 times award - winning documentary film features Matty Kahn, an 89 - year - old woman, who on March 1st 2006 volunteered for the Never2Late project to begin learning to play the cello.

Virtuoso is a winner of the British Film Festival of Los Angeles and the South Africa International Film Festival.

Virtuoso was an inspiration for the book called The Vintage Years - Finding Your Inner Artist, written by Francine Toder, Ph.D.

The film is now available on DVD